The most fun thing about writing is doing the audiobook version, and Foundations of Love was no different. You get to hear auditions from voice actors, and if you’re lucky, you find one that matches the voices of your characters perfectly.

We were really lucky!

Foundations of Love is now an audiobook that’s live on Amazon, Audible, and iTunes!  And we really think you’re going to like the narrator.  He really picked up on the subtle cues that we had for each character and ran with them.  His name is Ian Lockheart – remember that.  He’s agreed to narrate our complete Hart’s Square series!

If you want to pick up the audiobook version of Foundations of Love, you can find it here:

The next book in our Hart’s Square series is titled AI Think I Love You – and it’s a unique take on a romance book.  We went back and forth on the cover, but I think this one that we decided on came out perfect.  What about you?

You can click on the cover and it’ll take you over to Amazon where the book is available for pre-order!  The book will go live and be available on May 20th, so just eight short days away.  Or if you’re a member of Kindle Unlimited, this book will be part of KU starting on the 20th.  Here’s a little blurb from the book (which you can also click):

Joe Markarian was sick of every decision being made for him, so he got out from under his father’s thumb after college by joining the Air Force. He’s just about to re-enlist when he gets word that his estranged father is in the hospital, and needs his help.

Riley McCoy is a genius – just ask him – who’s been looking for love in all the wrong people. He has good friends, a niece he dotes on, and a sister who tolerates him, but he yearns for a love of his own. If only he didn’t keep moving too fast and scaring his partners off.

Joe and Riley are surprised to see each other at Markarian Scientific the morning after their unconventional first meeting. Joe’s taking care of his dad’s business, and Riley is the chief scientist in charge of the project. Will they be able to keep things professional, or will a snarky AI change their lives forever?

That’s it for now, friends!. Remember – keep reading, stay awesome, and be well! 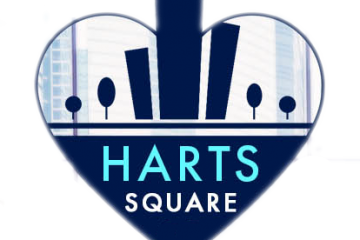 So much has gone on, and I have been really bad at updating the blog here.  But things are still going on – and a lot of them are good!  And we need good news these days.

I’m happy to announce that the first book in the Hart’s Square romance series, Foundations of Love, has been published!  It’s out there on the interwebs.  Even better, it’s FREE!  Yes!  All it’ll cost you is maybe a couple cups of tea or coffee and maybe a nice scone or cinnamon roll as you pick up your tablet, pull up the book, and then spend a couple hours with Keelan and Peter as they work through their baggage and figure out what they mean to one another.

Want it?  You can find it right here at StoryOrigins

If you’re interested, pop over and grab it. And I should say that there will also be an audiobook version, though, sadly, that one won’t be free.  But we’ll probably get some promo codes if you want one!

Foundations of Love is a prequel to the Hart’s Square series of books.  The first book in the series will be published within just a few weeks, and the second book is being written right now.  Matter of fact, I’m actually supposed to be writing it right now, but instead, I’m doing this.

I really hope you like not only this book, but all of the books to come!  We’ve got a lot in store.